You are here: Home1 / Shopping 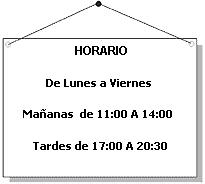 Most businesses are open from 10am to 1:30 pm and then from 5pm to 8:30pm. However, there are many variations on these times. Also, very often businesses will have different opening times at certain times of year – at Christmas, during local festivities, and (in the south) during the summer months.

Shopping centres and some shops (mainly large franchises) do not close at midday and are usually open from 10am to 9pm.

The biggest national chain of department stores is El Corte Inglés. Although not cheap, their supermarkets are a useful source of stuff you might miss from home, including curry powder, cheddar cheese, baked beans, Weetabix, etc. as well as products suitable for vegetarians and those who need to follow a gluten-free diet. For the latter, another national supermarket chain called Mercadona can be a valuable source.

In many parts of Spain, greengrocers, bakeries and butchers have not been replaced by supermarkets on the same scale as in other European cities of the same size. Very often these traditional local shops will be your first stop on a shopping trip.

You won’t find many ‘ready-made’ meals or ‘instant’ food in Spanish supermarkets. Home-cooking is still considered important for a good diet here, so supermarkets and grocers alike tend to sell ingredients which require more preparation and cooking than perhaps in other countries.

Another notable difference is the fact that ‘fresh’ milk (leche del día) is hard to come by, although El Corte Inglés and Mercadona are two supermarkets that sell it. UHT milk is considered the norm in the following three forms: whole (leche entera), semi-skimmed (semidesnatada) and skimmed (desnatada).

Fish, meat and vegetable markets have survived in Spain in a way that they haven’t been able to in many other western European countries.

Queuing, as we know it (in a straight line) is not so common among Spanish people. Because of the ‘disorderly’ nature of queues in supermarkets here, it’s quite normal to ask (and be asked) who is last in the queue (¿Quién es la última?) when joining a queue so you know when it’s your turn.

24-Hour ‘convenience’ stores are becoming more and more common. Many of them are run by Chinese immigrants. Although they can be quite expensive, they do come in handy in an emergency.